I’ve attached a couple pictures of the tanks we’ve installed at the South Pole this past “summer” season. We put in eight tanks this season, and plan another 20-30 each year over the next 5-6 years. The fabric held up well. I’ve also attached a press-release about the overall project in case you’re interested in a bit more about it. 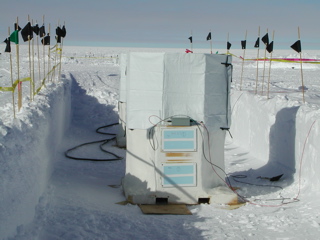 The tanks are a part of what we call “IceTop” which itself is a part of “IceCube” (see attached press release). In the pictures are seen two of the 1000 gallon water-tanks, out of eight total installed this past summer (austral summer, that is, mainly Nov, Dec, and Jan when flights are able to get in and out of the pole) season at the South Pole. Wrapped around a framework above the tanks are the “sunshades” for keeping direct sunlight from hitting the top of the water, since at the South Pole the sun simply circles around the sky while staying essentially the same distance above the horizon day after day (finally setting near March 21 and not rising again until Sept. 21). This allowed the water to freeze more rapidly, a surprising problem even at the south pole, because of the rather large thermal heat capacity of water it takes roughly two months for the entire tank to freeze. Two light sensors, identical to those deployed deep within the icecap, are frozen in the tanks, with two tanks being deployed on the surface above each IceCube hole. 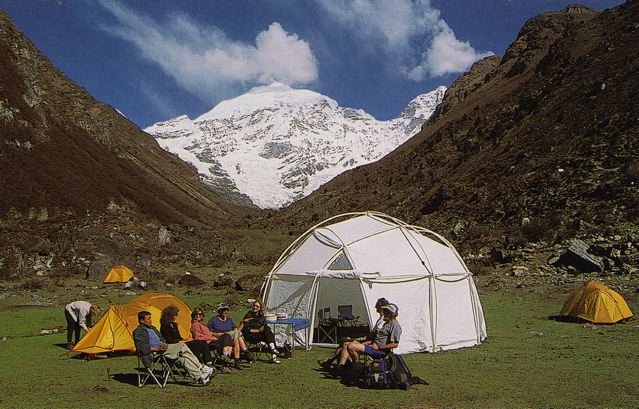 A number of years ago we bought a bunch of the domes from you to use on the trekking trips in Bhutan. They were a great hit and we want to place another order.

Here is a photo of the Dome Tent at Chemolhari: Base Camp in Bhutan. We love the tents!

We want to thank you for providing us such tents for temporary shelter relief. These tents stood up to the weather changes for the six months that we experienced. As you can see on the pictures attached, we found sand bag to be good anchors for the tents. The more it rains the heavier sand bag became. The heavier sand bag also became better anchors. The sand bags were 25 lb per bag and 10 bags per tent. 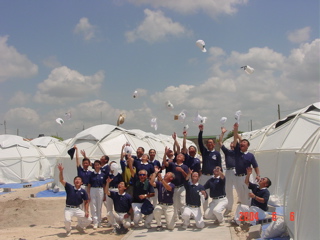 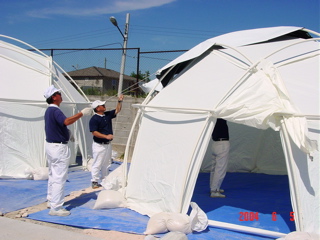 Dawntree Studio is into the second winter now.  Keeping warm. Had planned to build a “hard” studio by now, but considering a 30′ dia. yurt come spring instead. 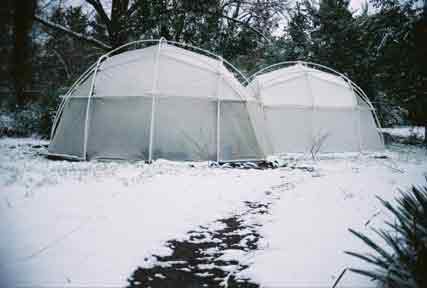 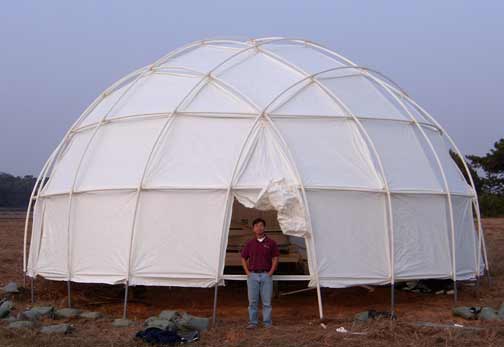 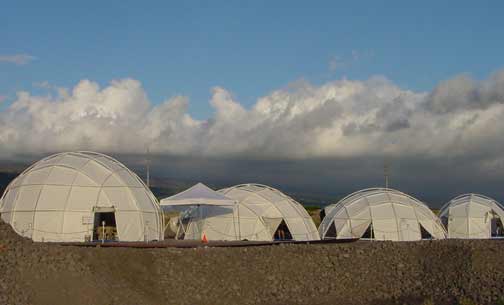 The yurts were a mixed blessing.  First, they looked very cool and definitely served the purpose of supplying culturally neutral shelter.  They also looked great in the various photos and served to soften the mil look towards a much more civ look.

We did meet with a couple of challenges.  The first was that when assembled by a small group of men that have just met, the large quantity of testosterone cancelled out any common sense that might have dictated actually reading the instructions before attempting to assemble.  Thus I question whether they were assembled as you would have done it, particularly the flooring.

The second thing that was a challenge was that it got way too hot without insulation.  It was very common to be dealing with internal temps of greater than 107 F by midday.  We ended up using industrial strength Velcro to attach the Reflectix to that part of the dome from about 5′ up in the primary dome and circulating the warm air with lots of fans.  Several other attempts were made to increase the air flow but some of those messed with the structural integrity of the dome.  We were subjected to variations in the weather, always hot, always humid and sometimes raining.  And when it rained, it poured.  Typically at night when we were gone, so it meant creating the venting at the top or leaving them open at night to cool wasn’t an option.

Several people suggested some kind of easy open, easy close venting in the “ceiling” of the dome, but I’m not sure how you would do that and still assure that it would be rain proof.

Live and learn, as the saying goes. 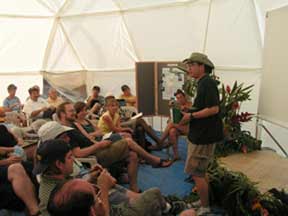 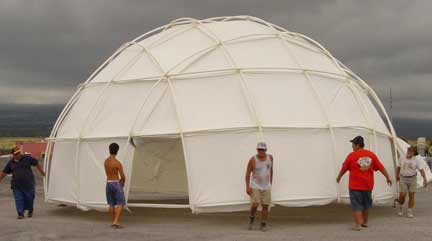 The best way we have found to keep the domes cool is to shad the structure using shad cloth (90% shade preferred, but 60% still works) (you can get this at most buliding supply stores) pulled over the outside frame of the dome and tied to the clips of the dome. This blocks the sun before it gets inside the dome. Vents are fine but shade is best. 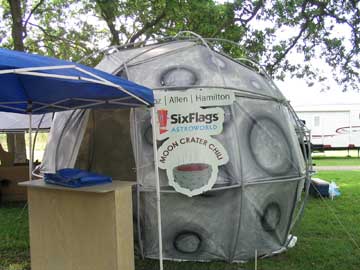 Last year we bought one of your 14’ domes and used it for our chili-cook-off store.  It went over real well; we had it painted like the surface of the moon.  During the competition we experienced a short Texas summer rain where it dumped over 5 inches of rain in a little over 2 hours.  The dome handled the wind and rain superbly and as a result we were one of the few teams that stayed in place and finished the competition. 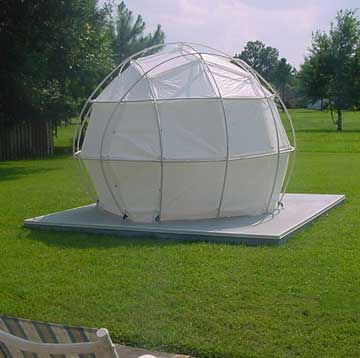 I have attached a picture of the bubble dome mounted on a backyard deck at my home, which backs up to a golf course. I live in Friendswood, Texas, which is about halfway between Houston and Galveston. This leaves me a decently dark suburban sky for astronomy work. My home-built 17.5″ Newtonian telescope now lives under the bubble. 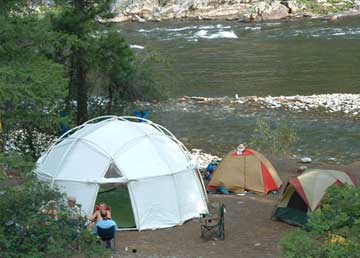 Dan Hinman
Orders and Customer Service
​Phone: 706-778-8485
E-mail: clay@shelter-systems.com
Get in Touch
© 2021 Shelter Systems. All Rights Reserved.
Back To Top