Thank you for expediting me the dome tent. I just got back from the Climbing Festival and the dome tent worked out great. It was very easy to set up and it stayed pretty warm. The first night the temperature dropped down to 25 degrees and the tent kept its warmth. Here are some photos of the tent at the festival. I was able to get a booth space to show off the tent. 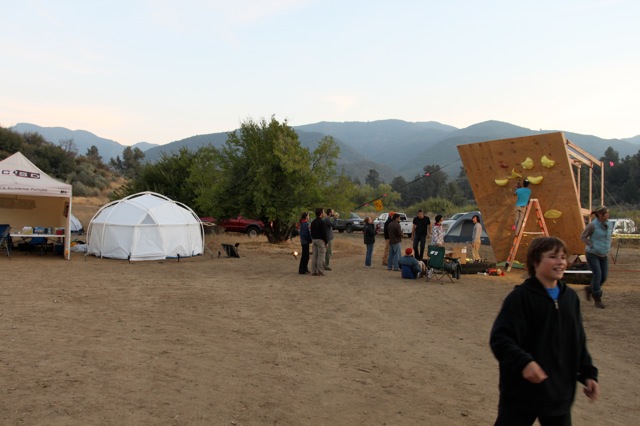 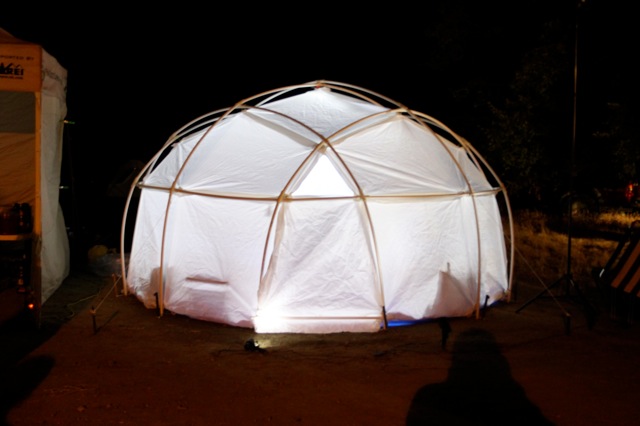 Here’s Andre’s cousin Joanne and her fiance in the shelter they made using a very large tarp that they got from the minister at their church. 14 people were sleeping here. When it rained, the ground got wet, so Andre loaned them one of our Shelter Systems domes. At first they didn’t like the idea of us loaning it, rather than giving it. Haitians definitely believe that possession is 9/10s of the law. But I’m pretty sure they can keep it until they feel brave enough to go back into their house. Andre’s stepfather is going to start repairing their house soon. It will cost about $4,000-$5,000. In the U.S. most of that cost would be labor with little materials. In Haiti it’s the opposite. The materials are extremely expensive, but his stepfather can hire help for low cost. He’s a builder, so he’ll supervise their work. I believe none of the cracks are structural, but there are a couple of places where he should open the stucco and be sure the concrete block below is still intact. I’m actually impressed how well the structure held up in a 7.0 earthquake — or “goudou goudou” as the Haitians call it. Only Andre and I and his brother-in-law are sleeping inside a house. The rains have begun, so I don’t know how long they’ll hold out. It’s been 3 weeks since any aftershocks. 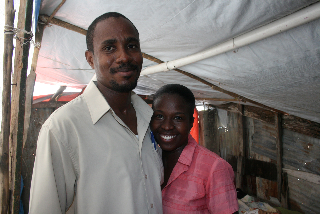 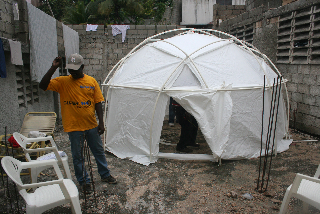 We set one up on the rooftop of his uncle’s house so they could see what it looked like and so they’d believe me that they’re really 14′ in diameter. It wouldn’t have fit where they had their temporary shelter if they hadn’t taken part of it down. I think they will sleep very well in here. The 14′ tents are designed for 8-10 people. Andre’s aunts, uncles and cousins are 14, but they said they fit fine.

I thought they could leave up the other structure and half of them could move into the dome here on the rooftop, but they’re too afraid that the neighboring walls would fall in on them in the event of another larger earthquake. They don’t seem to believe me that the pressure is off that fault line, so Port-au-Prince should be good to go for 50-100 years. That’s the numbers I heard in Santa Cruz after our 6.9 in 1989. It’s been 20 years and nothing big has happened there so far. Andre’s uncle measured and decided it would work. They started setting it up even while they were still taking down part of it to make room. I was worried they’d rip it with a nail. They did make one small hole, which I patched with duct tape. 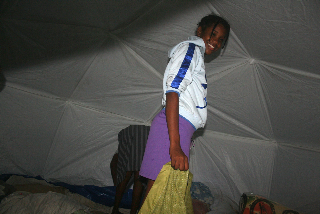 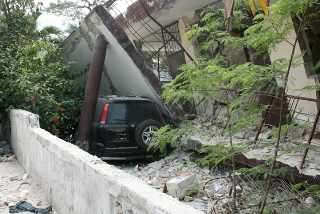 A lot of the cousins got in on the action. They called me an engineer because I sometimes remembered parts of the assemblage that Andre temporarily forgot. But he did the majority of the physical work in the Haitian heat. About 70 families are packed into this makeshift camp, on neighbor’s property that used to be parking area. There are three houses on their block that are completely destroyed, with bodies still inside.

Here’s another cousin and her mother at night, arranging the bedding in their new home. They’re very grateful and feel much more secure now. 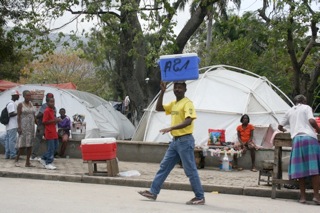 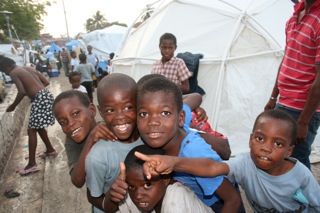 The tents we ordered have made it to our relief camp in Caneille Haiti. The people are greatly blessed to see them and how large they are. Once they figured out how they went together, they all went up quickly. As we have traveled about and encountered other tent camps, we have seen a number of Shelter Systems tents. Looks like you’ve had your hands full.

Was a bit of work to get it up… But it is up and looking good!

Still working on getting the interior/exterior fixed up…. the ladder was for the disco ball…. pretty cool light show at night with that on. 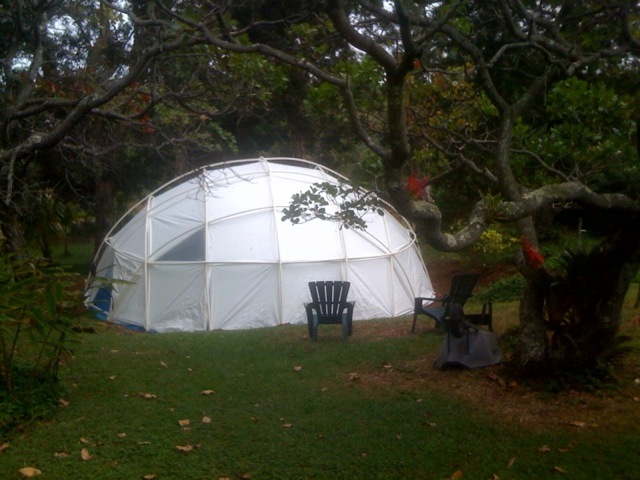 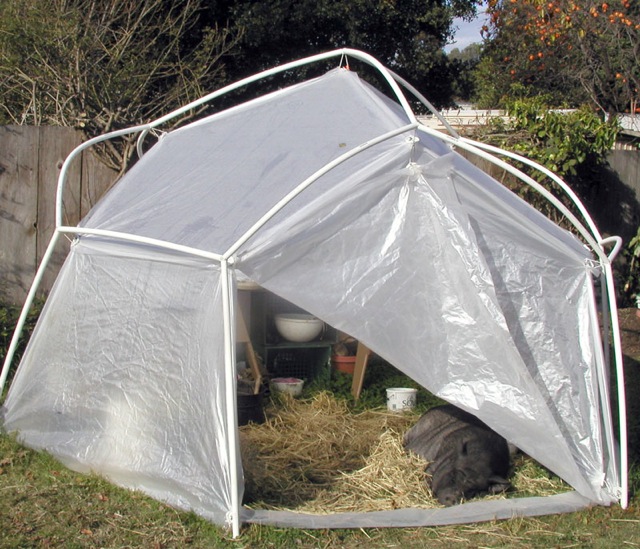 That was a nice article that the Sentinel did for you. A lot of people I know said they saw the article and that it mentioned the pig!

I am sending a few pictures I took this morning. We had a heavy frost last night so the yard was covered with frost. Chiron had slept inside the garage last night, this morning I was looking all around for him and found him in the Gro-Dome! He got in even though the door was hooked. It was nice and warm and is in the part of the yard where the sun hits first in the morning, it was a warmer spot than the garage. So I opened it up and got pictures of him taking a nap.

Here is a photo of my 10′ Dome set up with sunshade and floor, I set it up in my yard to test it out before taking it to Burning Man in 2009. I looked great!

Here’s the photos of the 14 foot and 10 foot domes in action out on the playa. My mom and her husband stayed in the larger 14′ dome, and I was in the 10′. We got a lot of compliments on how they looked and how spacious they are. And people in little backpacking tents were definitely jealeous. With the strong winds out there, backpacking tents fall apart easily, but these domes held up perfectly. When dust got tracked inside, it was easy to just sweep it out and keep it clean and tidy inside. I did’t tie in the floor, since the floor is over-sized, I just tucked it up on the inside and used tubs and coolers to hold it in place. Even the 10′ has ample space inside for a bed, food, gear, and of course, a big pile of funky clothes and costumes.

Here’s some photos of the 10′ being set up. With two people it went up in minutes. Luckily when we arrived to the playa it was a calm day, so set up was easy and we were able to get it up and staked out before any wind picked up. thanks for a great product! We love these domes!!

I attached images for you to see my installation. I have pictures of the sculptures inside as well but not on this computer. Will send them to you soon for you to see. I was very happy with the way the GroDome worked. 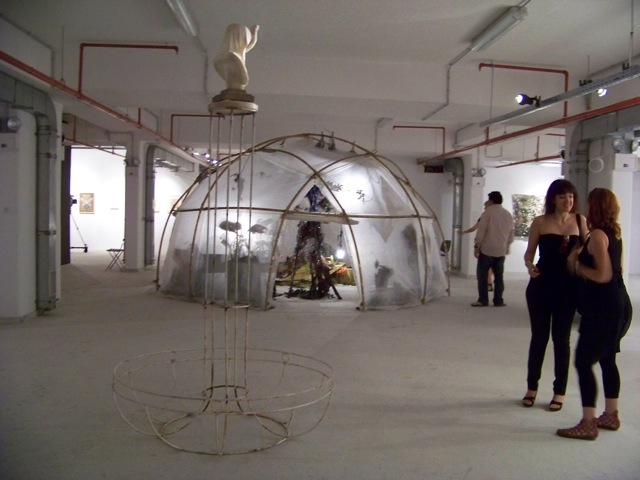 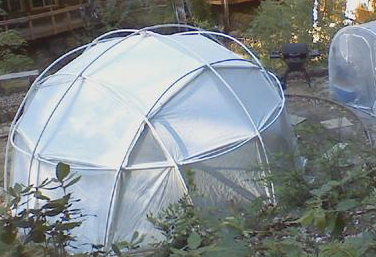 Bought my 18er a few years ago.

Been from Burning Man to Baja with it. Now I’m living in it up in the Redwoods here in Santa Cruz. Great space to live in!

Hoping to get the liner and small fire place in soon as it gets chilly.

Have to deal with electric heat (and a large bill!) for the time being. Feel free to use the pic. Thanks! 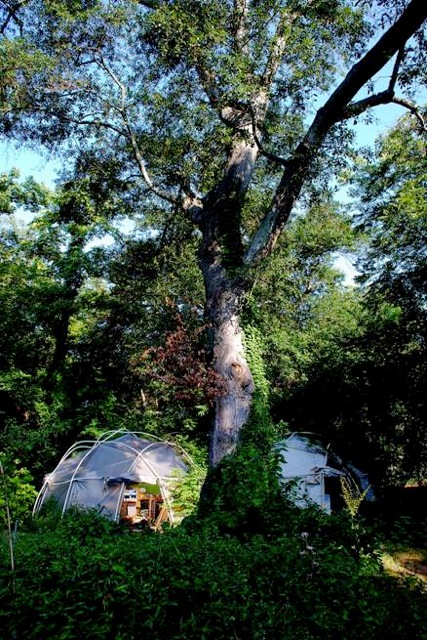 Bob, my yurts are still here, although they took a beating in last winter’s ice storm. They have been in continuous use as my sculpture workspace since 2003. The one on the left will likely be replaced this fall. I think I’ve gotten my money’s worth out of it. 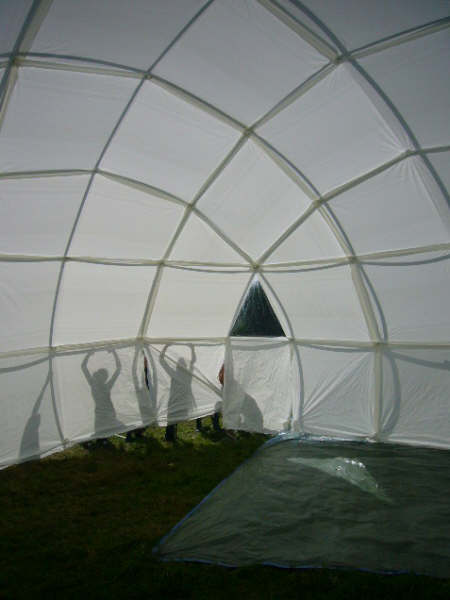 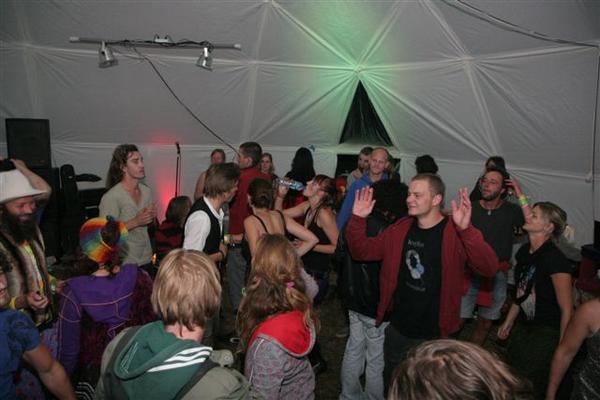 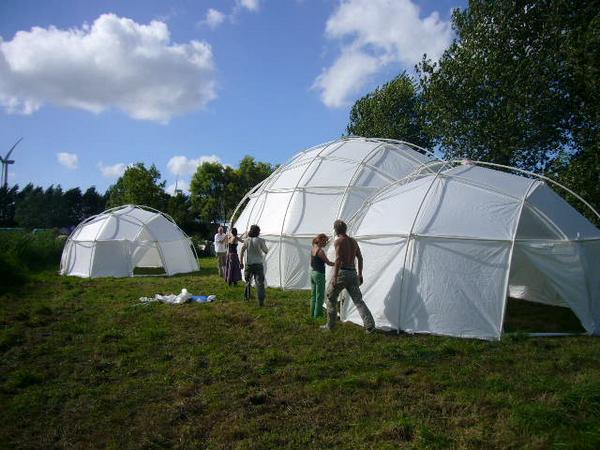 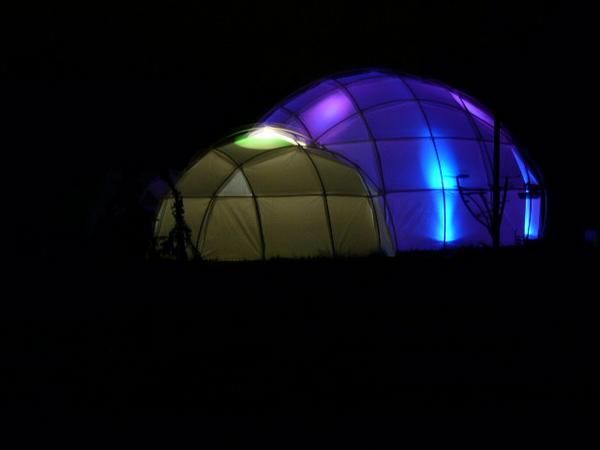