Bob, three nights ago, while I was away, we had high wind, with snow and sleet, and my two yurts, which have served as my studio since 2003 collapsed under the ice and snow accumulation. Frame members were snapped, panels were ripped, it was a mess. Unfortunately, there was no heat in the structures, which would have prevented any ice and snow buildup. I think they would have survived the wind, as they have withstood worse on more than one occasion. However, the yurts have outlived their designed lifespan by several years, so I have no complaints. By noon today, I had one of them up again. With some further patching, it will be a functioning shelter for my work for awhile yet. Still, I think it is time to seriously think about replacements. Do you have any designs in the works for a structure that might have more weight-bearing capability?
Thanks-
-Henry

Sorry to hear of your snow and sleet collapse. Your recovery was compromised by the age of the covering; most often just poles snap without any tear in the covering. The poles are inexpensive to replace just being PVC. Still, 6 years, as you point out is not bad.

To increase load bearing is tricky. The way the domes are provided the weakest link are the poles. See: https://shelter-systems.com/lighthouse-manual.html for two ideas of ways to beef up some of your poles. If we made the poles stronger, the covering would go first, which would definitely be worst. Poles are cheep and or easy to repair (just insert a section of branch). At an additonal substantial expense in weight, cost and bulk, the covering could also be beefed up also. But by doing this the structure could no longer be put up by one person without tools. 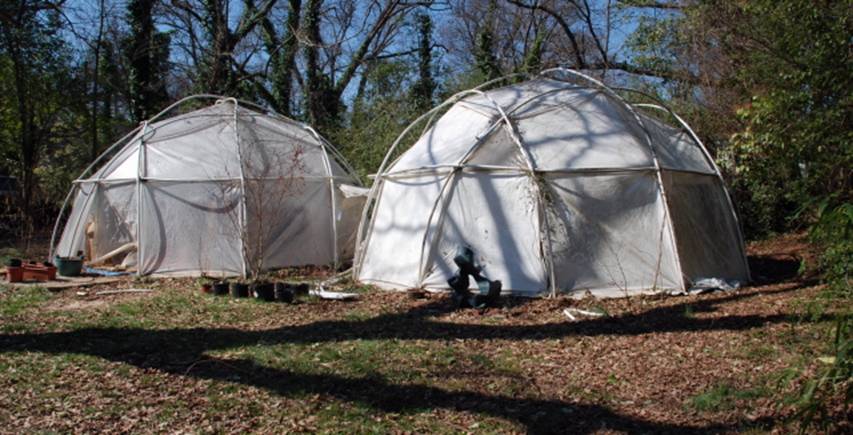 Bob, I got my other yurt up today, which fared better than the first. Had to replace several poles, but its hide was intact. The white material obviously has more UV resistance than the translucent. Amazingly, the contents of both yurts were dry for the most part. I found a couple of works in progress just as I left them, ready to go. Do you think an old guy like me could put up a 30’ yurt without assistance (I can handle the 20’ ok.)?
Thanks-
-Henry

I have done it but I had help in the past and would not want to try it again by myself. I would get at least one, preferably two other strong people to help. It is a work out. -Bob