I’m in the process of building an experimental aircraft. The wingspan is 32’ (width) and the length of the fuselage (body) is 22’ long, forming a cross type shape. The height of the assembled airplane is between 6-7’ tall. I’m looking for a cost effective option to build a temporary hangar at my home for final assembly of the airplane, plenty of ventilation for making it a paint booth, and resulting with a recycled dome for camping ,greenhouse, and exhibit booth for my computer store. I’m working on a ROI (return on investment) based on my camper, greenhouse, hangar rental and having someone else paint my airplane along with using this as my new exhibit booth for my small computer store in the rural Midwest US.

I have plans to sell my travel trailer (camper) in the spring of 2009 and purchase a 20’ shelter-system dome in time for Oshkosh Wisconsin’s Air-Adventure airshow the last week of July 2009. I haven’t decided if I purchase a 20’dome as a shelter or greenhouse. Is it possible to purchase the greenhouse and a liner so I could use it for both a tent and greenhouse or put up “room dividers”?

I’m wondering if I can combine 2-3 20’ domes or integrate 2-3 domes of differing diameters in a triangular pattern to build a temporary open structure for final assembly of my aircraft. If I could use 2-20’ domes for the wingspan and integrate a smaller dome to extend the length of the 20’ dome to allow for the fuselage length, that would work too! I would need enough room to walk around the airplane inside or integrate 3 20’ domes for an open triangular structure, probably 4-6’ area around the plane to have adequate room to work on the plane.

If I could do this, then I would have an extremely flexible shelter dome system to meet the many needs I have for a temporary structure. I have also been kicking around the idea of using my dome for my computer store exhibit booth as we do local county fairs and events to showcase our products. This would be an awesome display area, but the increased costs of renting more space may be an issue too and part of the ROI as well.

Building this airplane is a dream and a long term project (5-15 years). I have a large enough home and shed to store the parts and sub-assemblies for the airplane. I would need domes added as the sub-assemblies to increase the size for final assembly.

I would like to compare the purchase of these domes compared to replacing my travel trailer (camper), renting an airplane hangar, travel to/from the hangar for 1-2 years, cost of having my airplane painted versus doing it myself, and upgrading my current display booth for my computer store.

So far, I’ve been self-convincing that these domes are the way to go, however, requesting a custom 40’ plus dome wouldn’t be cost effective or serve my multi-purpose desires. Purchasing two or three 20’ domes or various diameter domes and then use them for the temporary open area structures would make a versatile dome series and selling the remaining domes would be the optimal ROI plan.

Thank you for listening to my wild idea to help fulfill a lifelong dream to build and fly my own airplane. I’ve loved geodesic domes since my first article I read in a 1972 Popular Science magazine article that I made a copy of at the library and still have in my projects folder. I’ve already told my wife that my next house is a geodesic dome. I haven’t figured out how to make a log home into a geodesic dome, but from what I’ve seen, I could come really close to transform a metal roofed barn for my country girl wife into an efficient contemporary dome home.

My wife also tells me to quit starting new projects, but if I can improve my current projects, then I’m getting more efficient and many other things right (justification).

Have a safe and prosperous New Year! 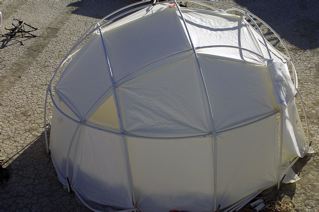 We have joined two domes together in the past however some strength is loss and the dome/s are complicated in that a gutter needs to be created were the domes are joined.

Here is a photo near the top of the dome. The domes can be truncated and joined at the pole arches. We have not joined three 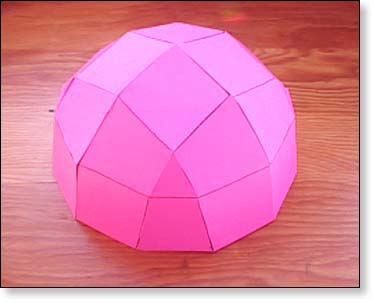 but this would seem possible but again at a loss of strength.

I cannot recommend joining for your project but it may work. If you do give it a try let me know how it turns out and send photos.

I would also suggest you to make a model by cutting and joining three dome models: https://shelter-systems.com/modle.html

Here you can see two 20′ domes joined. A fabric gutter is hung on the inside of the junction that directs water to the outside of the dome. If I was to do it again I would double up the junction poles for more strength. 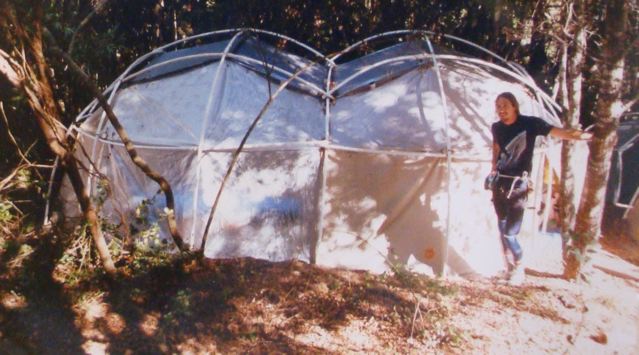