Some of these photos were sent to us from the gallery which sponsored the show. Cathy’s piece is in several of the shots. I will get back to you regarding the use of the photos once I talk to the photographer. We are driving down this weekend (800 miles) to dismantle the piece and bring it home. I will attempt to answer some of your questions. The ICE FOLLIES was a curated art exhibit in which 7 artists from Ontario were invited to create their personal conception of ice fishing. The event received wide media attention including national radio and television coverage as well as a special on Canada’s version of PBS. On opening day, hundreds of people ventured out onto the lake to partake of the adventure. And it was an adventure considering the fact that the day before, nearly three inches of rain fell and the frozen lake turned to pure slush. Cathy’s piece used, of course, your bubble dome as the basic skeletal structure. She covered the dome with a variety of fabrics including, dyed cheese cloth, bubble wrap, synthetic sausage casings, and various linens. The one interior shot shows some of the workings of the fabric but it doesn’t tell the whole story since the art works were by consensus, works in progress and a touring international show is being seriously considered. The fish seen in some of the photos are plasma cut aluminum, rolled and spot welded, creating a dramatic and majestic effect. 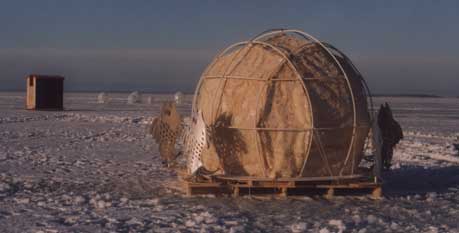 Cathy didn’t cut an opening in the roof (not yet). Her intent to use underwater cameras and sculptural pieces was in part thwarted by the weather, difficulties in providing electricity to such a remote location, and of course security concerns. The option is still open in the future. We are considering bringing some form of the piece with us when we travel to Newfoundland this summer for an artist’s residency. I will send further photos and hopefully permission to use them as you see fit once I get permission. Any of my photos are at your disposal. (The first two sets which I sent were taken by me but the outcome was somewhat disappointing because it was such a dismal day.) Will write again once we return. Zen.

Once we get to Lake Nippissing we will be able to offer a more effective testimonial regarding the practicality and (hopefully) durability of the dome. The particular area is part of a wind and snow belt so the structure certainly was put through many trials. From what we have been told, it has survived unscathed. I did tie it down at 32 different locations, so that must have helped. In any case, I will contact you upon our return and will send additional photos.