The dome has been really wonderful, we just love it. As I mentioned in our telephone conversation, we used the grip clips around the third band of poles to clip in a marine tarp roof. Our dropped ceiling was an effort to heat less ceiling space.<

Our cave in would have resulted in just a bit of ice on our bed if the ceiling had not been there. Instead the weight of the sleet and ice on the tarped ceiling buckled the entire structure.

Here are some pics. The one during the sleet storm. His efforts to keep digging the snow out helped release some of the pressure. We look forward to getting it back up for the spring. 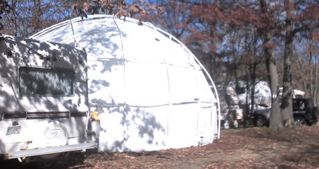 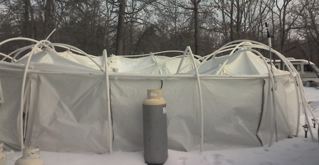 Yahsha
Orders and Customer Service
​Phone: 706-778-8485
E-mail: clay@shelter-systems.com
Get in Touch
© 2022 Shelter Systems. All Rights Reserved.
Back To Top