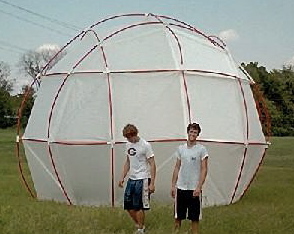 My company is working on systems to make biofuel from algae. We needed a large spherical dome to act as both greenhouse and reflector. It also had to be easy to assemble and transport.

From previous domes we had bought from you, we knew you could make what we needed. It arrived and we assembled it in a hour. It performed as planned. The tests were moving ahead until… The tornado hit.

We will be calling you again soon.