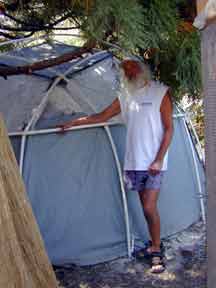 It was over 5 years ago when Gordon brought the dome into our yard. The wind once blew it over the fence.We put it under the tree to secure it. A never ending parade of people stayed in it. We never had a night when some one was not in it. The tree protected it from the sun.

One time a yoga stayed it in and he said there was too much sexual energy in it. Lots of couples stayed in. We had another dome for a while. We used it for a mediation dome. The one dome we used for people who would come through and then leave. The other we use to put people up for extended periods of time. The domes have been used a lot. We let people use the dome when they had no other place. One woman wrote us a letter to us to tell us about how beautiful it was living in the dome. It helped a lot of people over the years. The dome now is used as a permanent residence. Here is a photo of me in front of it.