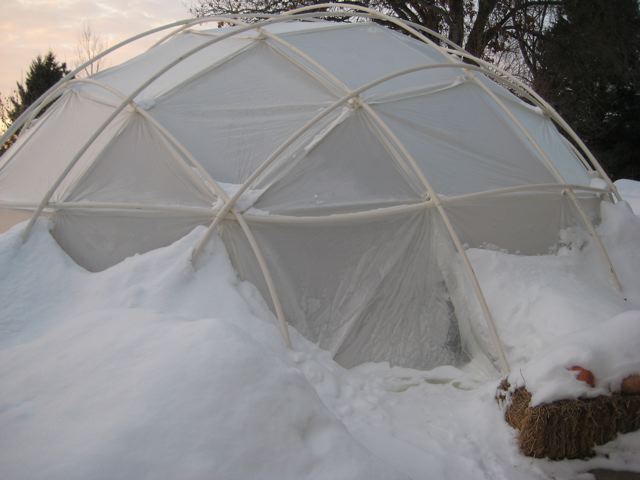 Attached are some photos of our application as a cover for our Koi pond. I had to get creative to remove snow/ ice from the dome. Since the center of the dome is over open water, I folded a bath towel and tied it around the end of a 8’ 2 X 2 ( it kind of acts like a soft boxing glove). With this I am able to push up and bounce each panel which causes the snow, etc. on top to slide down the side of the dome. I don’t have to worry about the wind getting under the side of the dome that is fastened to a plank spanning the front of the water falls because the snow accumulation from clearing the roof has built up several feet on top of the perimeter ice, pretty much sealing bottom of the dome.

We just finished a period of 84 consecutive hours of below zero weather, and it still hasn’t gotten above freezing,but the recirculation pump has still managed to keep a fairly large opening in the ice in the center of the pond with only a minimal amount of ice chipping around the outlet of the pump. With open water re-circulating, the inner surface of the dome builds up a layer of hoar frost. I noticed that there was what I felt was substantial sagging of the panels from the weight of this accumulation. I’ve found that running my propane torpedo heater for about an hour at 55,000 BTU caused the frost to melt back and ‘rain’ in the dome. When I did this with the outside temperature below zero, the frost re-froze into a thin sheet of ice on the inside. However, this sheet easily cracked and fell off by using the “boxing glove” bouncing method. I’ve only had to use the heater three times so far, and January is normally our coldest month.

I had ‘banked’ the outside of the dome with straw bales against possible high winds, but I took them away because the snow was building up too high on the dome before it would taper down. As you can see from the pictures, the bottom of the dome is sufficiently banked by the snow alone.

The dome went up fairly easily for my wife and I, but a third person would have made it a lot easier. We managed to get it up with breaking only one pole. 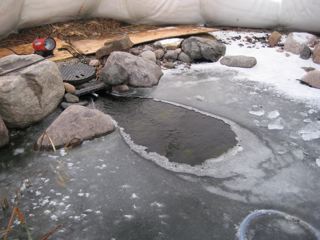 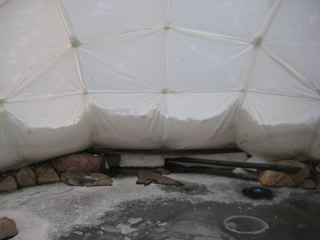