ABSTRACT OF THE DISCLOSURE

A clip is disclosed for securing an object such as a tent fabric to an elongate support such as a pole or cable in a manner does not slide along the support but that can be easily engaged and disengaged. The clip includes a hook and a cam-shaped clamp that is manually rotated between an open position in which the cam surface of the clamp is retracted sufficiently to allow easy insertion of the pole or cable, and a clamping position in which the cam surface presses the pole or cable against the interior of the hook.

BACKGROUND OF THE INVENTION

This invention relates to structures that utilize poles, rods, or cables for support, and addresses the need to quickly attach an object to such a support in a secure, non-sliding manner while also being able to quickly disconnect the object for purposes of dismantling the structure.

Tents and canopies are frequently designed to be erected on a nonpermanent basis for events such as outdoor parties and receptions, circuses, revival meetings, political fundraisers, booths at fairs and festivals, and the like, and after use to be dismantled and removed for storage and re-use. In these structures, canvas or other fabric is secured to a pole or a framework of poles, and the efficient erection and dismantling of these structures requires ease of assembly and disassembly while still providing a secure attachment of the parts when assembled. In some structures, cables or other types of flexible or semi-flexible support lines are used in place of rigid poles, but they are still needed for structural support and they are of limited usefulness when the attachment is not secure and is not capable of quick assembly and disassembly. Banners and flags are similarly used in conjunction with pole or cable supports, and although they have somewhat less of a need for quick assembly and disassembly, they would still benefit from a more secure attachment. 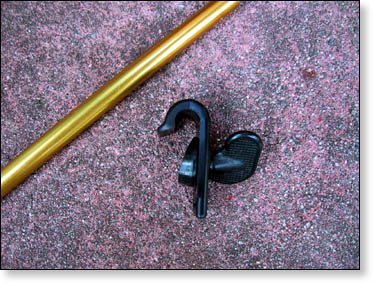 SUMMARY OF THE INVENTION

The present invention resides in a clip that includes a hook and a rotating clamp with a cam edge. The clamp is rotatable between two positions, one in which the cam edge is retracted from the hook opening so that a pole or cable can be inserted into the hook, and the other in which the cam edge is advanced toward the hook opening, partially closing it and pressing the pole or cable into the hook. The former may conveniently be referred to as the “open” or “non-clamping” position, while the latter may be referred to as the “clamping” position. In certain embodiments of the invention, the clamp has a sloping surface that forms a guide that tapers toward the opening when the clamp is in the open position and thereby facilitates the insertion of the pole or cable into the hook. When the clamp in these embodiments is rotated into the clamping position, the slope tapers in the opposite direction, away from the hook opening, thereby no longer serving as a guide toward the hook opening but instead helping to prevent the escape of the pole or cable from the hook. Also in certain embodiments of the invention, the clamp is biased toward the clamping and open positions such that once it is in either of these positions, it encounters relatively high resistance to rotation and thereby tends to remain in the position without being inadvertently shifted to the other position of to a position that is intermediate between the two.

Use it to secure tents, webbing, protective shades or coverings, fabrics and flags to aluminum poles or fiberglass wands or graphite rods with out sliding. Twist the key and its off!